AUD/USD attempts to retrace the decline following the update to the US Consumer Price Index (CPI) as it bounces back from the 50-Day SMA (0.7715), and the exchange rate may stage another attempt to test the February high (0.8007) as it appears to be reversing course ahead of the monthly low (0.7675).

AUD/USD has largely negate the head-and-shoulders formation from earlier this year as it persistently holds above the neckline, and the exchange rate may continue to appreciate ahead of Australia’s Employment report as a growing number of Federal Reserve officials warn of a transitory rise in inflation.

The update to Australia’s Employment report may sway AUD/USD later this week as the figures for March showed a larger-than-expected rise in job growth, with the economy adding 70.7K jobs versus forecasts for a 35.0K expansion. Another above-forecast employment print may spark a bullish reaction in AUD/USD as the Reserve Bank of Australia (RBA) acknowledges that the “economic recovery in Australia had been stronger than expected,” and Governor Philip Lowe and Co. may gradually change their tone over the coming months as the minutes from the May meeting emphasize that “a return to full employment is a high priority for monetary policy.”

It remains to be seen if the RBA will adjust the forward guidance at its next meeting on June 1 as “the date for final drawings under the Term Funding Facility is 30 June 2021,” but the recent flip in retail sentiment may keep AUD/USD afloat as it largely mimics the crowding behavior from earlier this year. 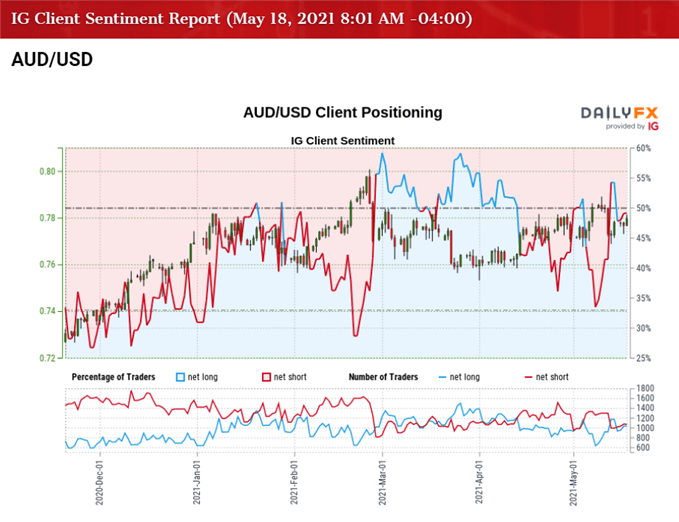 The IG Client Sentiment report shows 48.24% of traders are currently net-long AUD/USD, with the ratio of traders short to long standing at 1.07 to 1.

The number of traders net-long is 2.65% higher than yesterday and 17.42% higher from last week, while the number of traders net-short is 2.92% higher than yesterday and 13.20% lower from last week. The rise in net-long position has helped to alleviate the tilt in retail sentiment as 44.09% of traders were net-long AUD/USD last week, while the decline in net-short position comes as the exchange rate reveres ahead of the monthly low (0.7675).