A new paper published on the preprint server medRxiv* finds that the influenza vaccine may influence both the response to and incidence of infection by the severe acute respiratory syndrome coronavirus 2 (SARS-CoV-2).

The researchers of the current study present evidence that those who took the flu shots experienced an immune response that reduced their risk of the coronavirus disease 2019 (COVID-19), the disease caused by SARS-CoV-2, by 37% during the first wave of the pandemic, and by almost half in the second wave. This indicates that influenza vaccination may protect against SARS-CoV-2 infection.

Against the background of the COVID-19 pandemic, much attention has gone into developing preventive and therapeutic measures to control the spread of SARS-CoV-2. Among the most effective, to date, have been the vaccines, all of which have been developed at an unprecedented speed and have since been administered to over 42.3% of the world’s population.

Several other vaccines, such as the bacilli Calmette-Guerin (BCG) vaccine against tuberculosis, have non-specific effects on immunity and can thus enhance the innate immune response against pathogens in general over the long term. This phenomenon is known as trained immunity.

Some studies have indicated that the annual flu shot provides cross-protection against COVID-19. The current study looked at the incidence of COVID-19 among hospital employees at one large hospital in the Netherlands and compared these rates among those who had previously received the flu shot with those who did not.

The same pattern was repeated in the second wave of the COVID-19 pandemic, where the flu shot coverage was 42%. The researchers found that 2% of those who were vaccinated against the flu, but 3.9% of those who were not, contracted COVID-19. The risk was thus 50% lower in the flu-shot group.

The researchers found that this protective effect might be due to trained immunity. They examined the blood cells of the study participants before and after vaccination. To this end, changes in the transcription profile of both lymphoid and myeloid cells, particularly in CD14+ monocytes, were observed.

These innate immune cells showed differences in the regulation of 136 genes, very similar to the pattern seen in CD4+ naïve T-cells. The expression of myeloid cell nuclear differentiation antigen (MNDA) and cathepsin S (CTSS) was much higher than the baseline following flu vaccination. However, the JUN pathway that is related to the nuclear factor kappa-beta (NFKβ) signaling pathway, which was downregulated in the monocytes, was upregulated in the CD4+ T-cells.

Many of the pathways that are essential for host immune defenses against COVID-19 are expressed at higher levels within the monocytes of individuals after the flu shot. More specifically, higher expression was observed in both the antigen processing and presentation pathways that trigger the adaptive immune response.

Since the hyper-inflammatory response seen in severe and critical COVID-19 is thought to be due to a dysregulation of the immune response that is triggered by SARS-CoV-2, this area was also explored.

The researchers found that almost 370 inflammatory proteins were strongly downregulated after the flu shot. This included many cytokines from the tumor necrosis factor (TNF) superfamily, interleukin receptor-associated proteins, and mitogen-activated protein kinase kinase 6. In fact, just one protein that is required for the synthesis of oligosaccharides for protein glycosylation was found to be upregulated.

“These data demonstrate that influenza vaccination is associated with lower systemic inflammation and downregulation of several inflammatory and apoptotic pathways.”

The scientists also found that stimulation with the inactivated flu virus led to enhanced TNFα production from white blood cells, as did the Toll-like receptor (TLR)3 ligand poly(I:C). The latter also caused an increase in the production of interleukin-6 (IL-6) six weeks after the flu vaccination.

Conversely, IL-6 was markedly reduced against SARS-CoV-2 at the same timepoint.

When the IL-1 pathway cytokines of IL-1β and 218 IL-1Ra were assessed in stimulated white blood cells, the researchers found that IL-1β levels were reduced against SARS-CoV-2 after the flu shot, whereas 218 IL-1Ra levels increased. Neither the flu virus nor SARS-CoV-2 caused detectable levels of IL-12 to be observed. 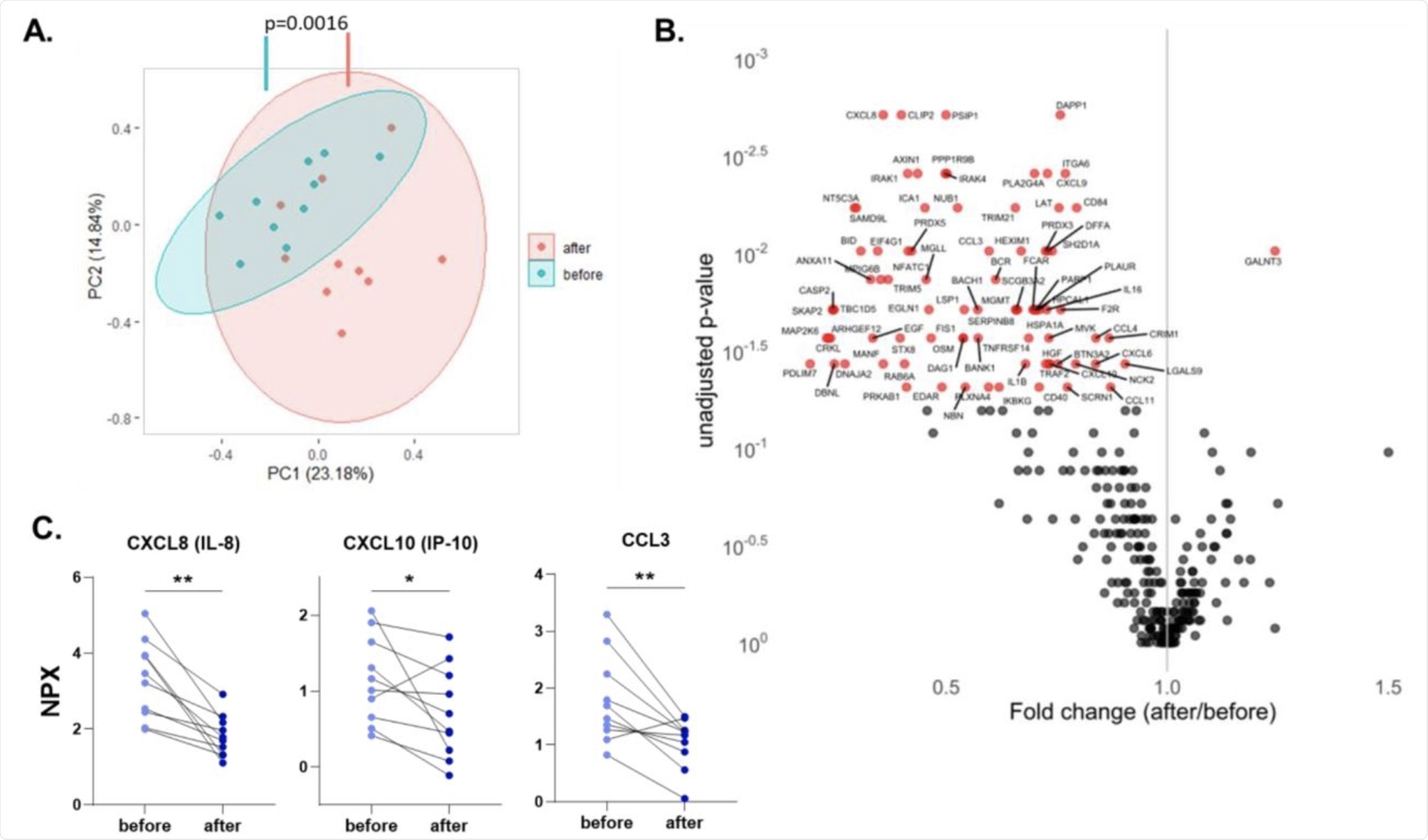 The flu shot thus elicits a strong immune response to viral stimuli including poly(I:C). With subsequent SARS-CoV-2 challenge or infection, the immune response shifts towards a lower state of inflammation with higher levels of anti-inflammatory cytokine production. The baseline level of inflammation is correlated with a greater anti-inflammatory response in SARS-CoV-2 infection in people who have taken the flu vaccine. 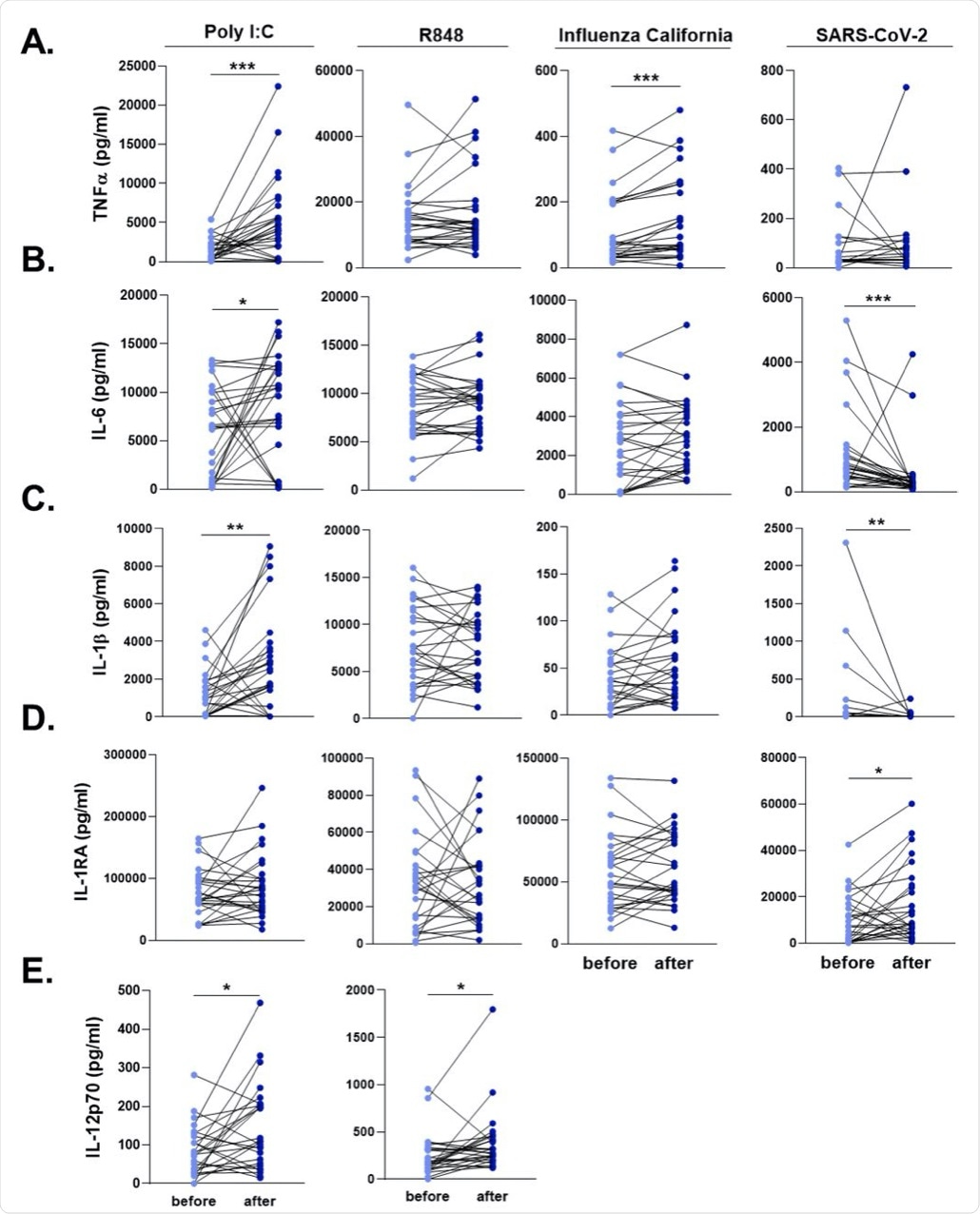 PBMCs were stimulated with heat-killed Influenza H1N1 (California strain), heat-killed SARS-CoV-2, poly I:C, and R848 for 24 hours. A. TNFα, B. IL-6, C. IL-1β, D. IL-1RA, and E. IL-12 responses were quantified. SARS-CoV-2 and Influenza stimulations did not lead to detectable levels of IL-12. Wilcoxon signed-rank test was performed to compare the differences in cytokine production between before and after influenza vaccination. Light blue dots represent the cytokine values before vaccination, while dark blue dots show after vaccination. n=28 *p<0.05, **p<0.01, ****p<0,0001.

The results of this study show that the quadrivalent inactivated influenza vaccine reduces the risk of COVID-19 infection by up to 47%. Immune cells become more responsive to a variety of viral stimuli after the flu shot, thereby indicating that this vaccine trains the immune response.

The flu shot also reduces the inflammatory response to subsequent SARS-CoV-2 infection. The influenza vaccine is thus safe, even if the individual should later develop COVID-19. 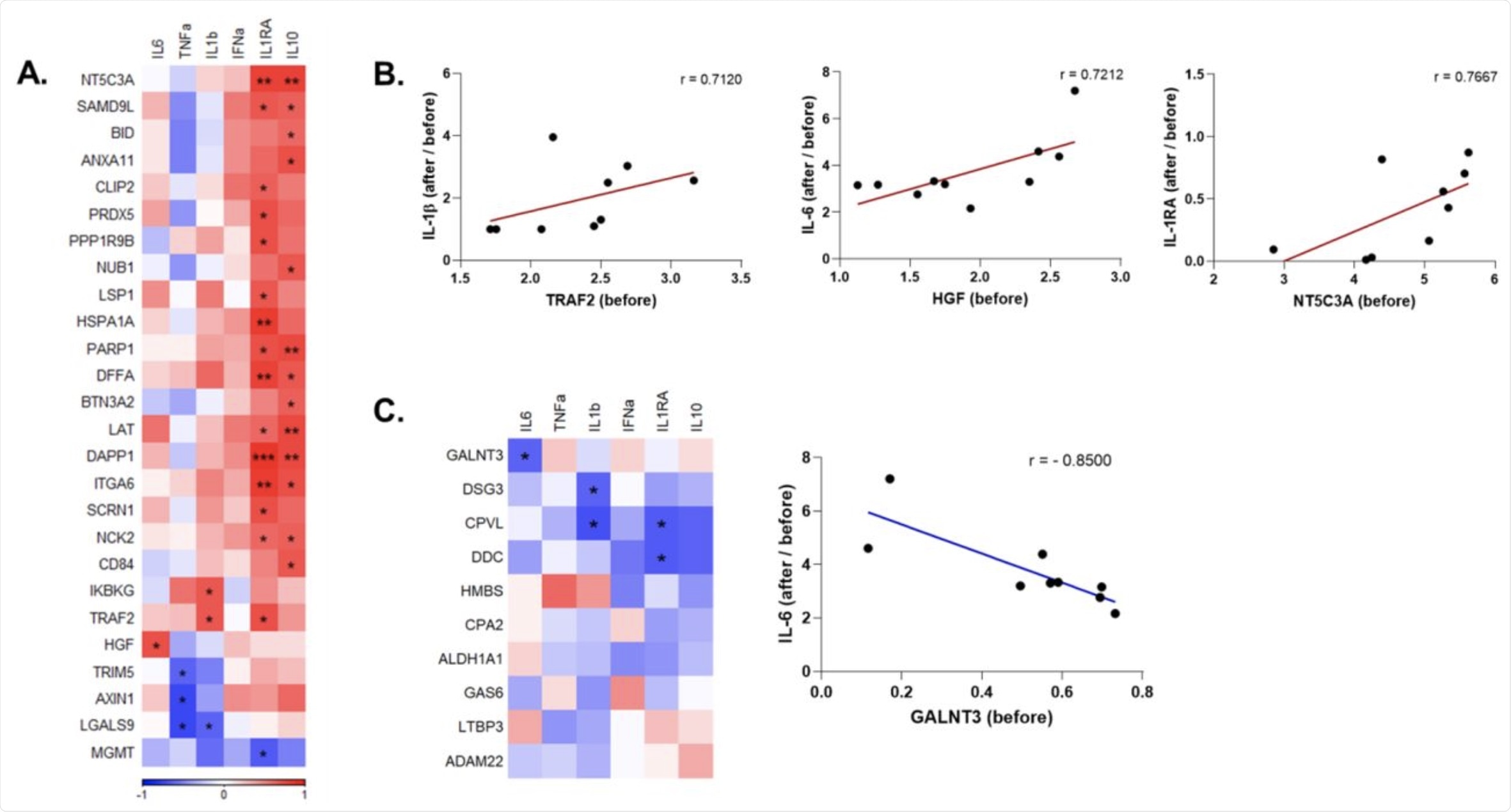 A. Heatmap depicting the baseline (before vaccination) levels of inflammatory mediators that were downregulated by influenza vaccination and are significantly correlated with the induction of cytokines upon SARS-CoV-2 stimulation before vs. after vaccination. Red indicates positive correlation, and blue indicates negative correlation. B. Selected circulating protein and cytokine pairs that are significantly correlated. C. Correlation of circulating proteins that were upregulated by influenza vaccination with anti-SARS-CoV-2 cytokine responses, and dot plot depicting the association of baseline GALNT3 levels and induction IL-6 against SARS-CoV-2 after vaccination. r: Spearman’s correlation coefficient. *p<0.05, **p<0.01, ***p<0,001.

These findings agree to a large extent with earlier research showing an inverse correlation between flu vaccination and COVID-19-related serious illness and death. The underlying mechanism is hinted at in this study, in that training of the innate immune response results in a change in the transcriptional profile. This causes an accompanying change in the innate immune function beginning six weeks after vaccination.

The reduction of inflammatory gene expression indicates a potential mechanism by which the influenza vaccine reduces the severity of SARS-CoV-2-related tissue damage. The enhanced immune response may be linked to the reduced systemic inflammation after the flu shot.

“However, it is clear that different types of influenza vaccines, also depending on the adjuvants, induce distinct trained immunity programs.”

Further research is required to more accurately assess how these vaccines affect COVID-19 incidence and confirm their potential benefit. 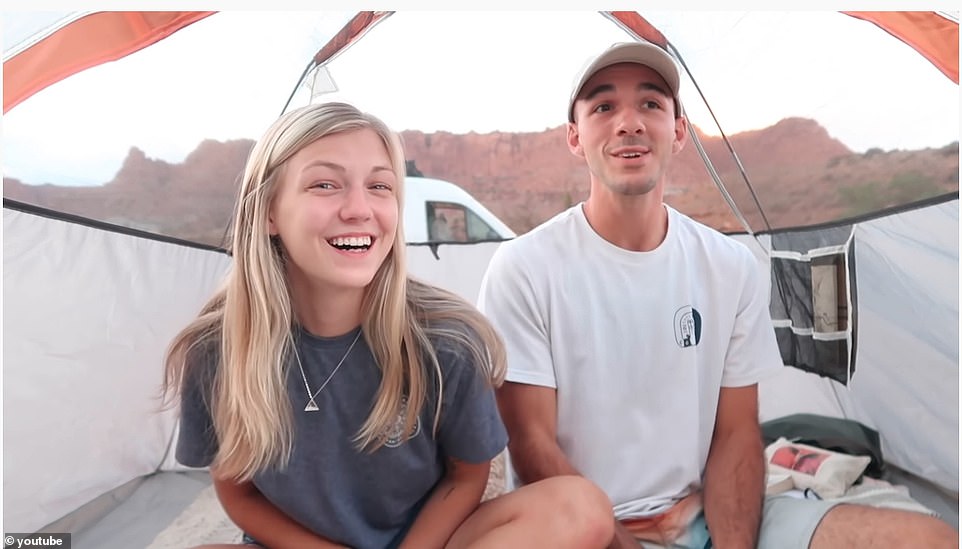 Gabby Petito’s death is homicide and her cause of death is pending, autopsy confirms
4 seconds ago

Gabby Petito’s death is homicide and her cause of death is pending, autopsy confirms 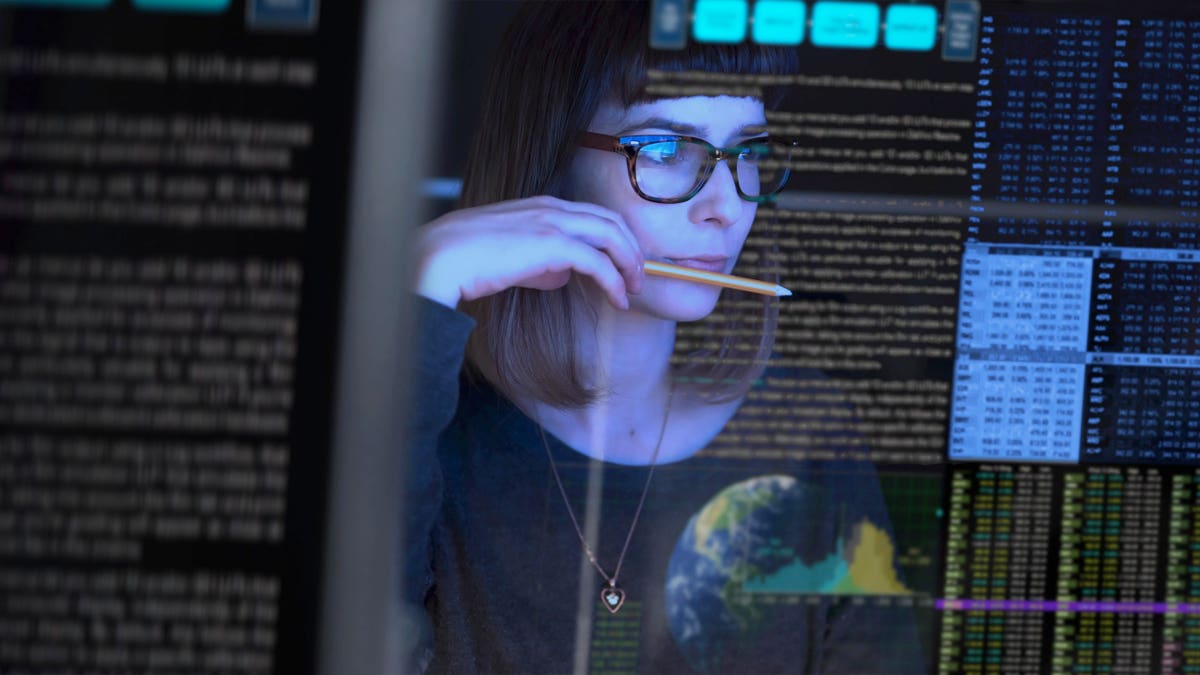 Kena: Bridge of Spirits
4 mins ago 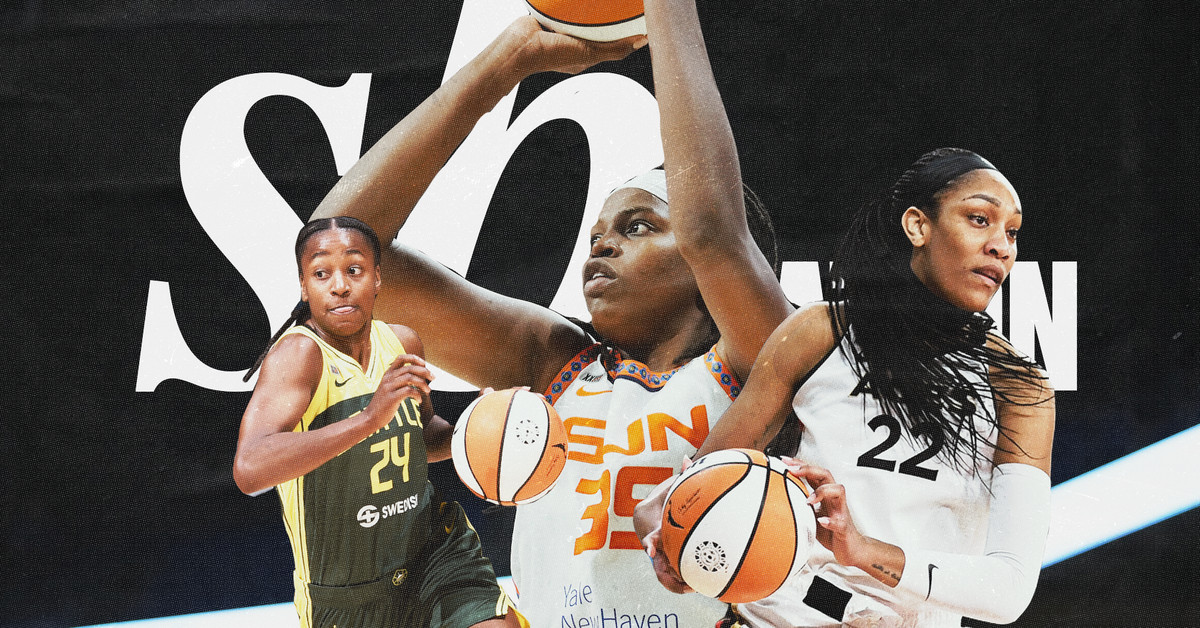 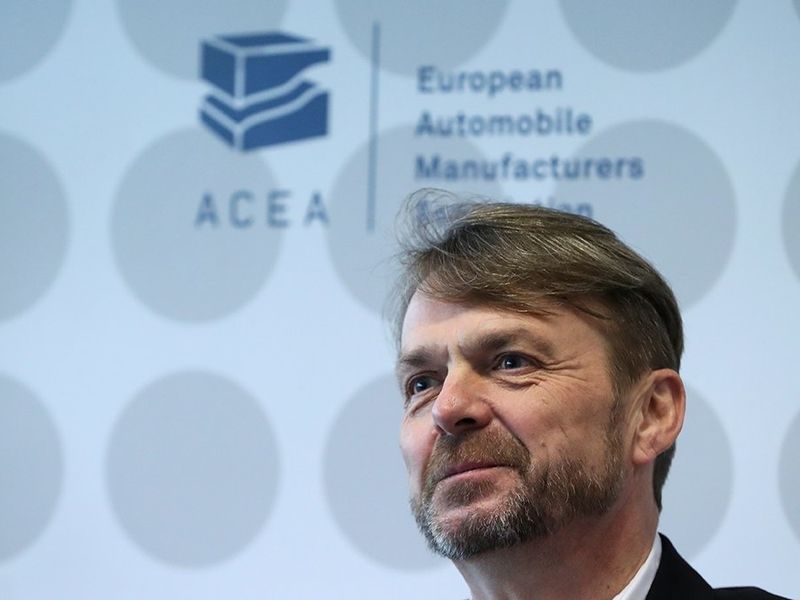