When the glaciers retreated 13,000 years ago from northwestern Pennsylvania, eight natural lakes were left in their wake. The ones that have become popular, like Conneaut and Edinboro lakes, have vacation homes, resorts, and farms nearby. But one lake stands out as a jewel of the region: Lake Pleasant. Conservationists have spent decades protecting it from human development and invasive species. It’s now considered the most pristine of the region’s glacial lakes. Keeping it that way takes vigilance.

This story is part of our series, Wild Pennsylvania. Check out all of the other stories in the series here.

On a weekday morning, it’s quiet on Lake Pleasant as experts from the Western Pennsylvania Conservancy canoe past the green hillsides. Along the shoreline of thick foliage, Ellery Troyer, an environmental consultant they’ve hired, and his crew, are slathering what looks like paint onto the cattails.

LISTEN to the story

Troyer holds a pail of herbicide that’s dyed turquoise. “We’re doing what’s called hand wiping, or hand wicking,” he explains as he dips in his gloved hand to soak up the liquid, then takes the bottom of a cattail stalk between his fingers, and swipes upward.

“It’s the most targeted way to chemically treat the targets, which are all of our cattails here,” Troyer said.

There are so many cattails, the blue herbicide helps the crew keep track of what they’ve treated. It will take all day to get through this half-acre. It would be a lot quicker to spray the chemical.

“If we were to spray with backpack sprayers, everything would be dead in here,” he said.

And they don’t want to kill anything except the cattails.

“There are all sorts of incredible plant species in here — the pitcher plants are flowering right now. It’s worth taking the time to do it because of the habit,” Troyer said.

It’s not that cattails are always bad, but here a native variety has hybridized with a non-native species. He’s seen the results of letting that go unchecked on the north side of Lake Pleasant.

“They’ll eventually just crowd everything else out,” Troyer said. 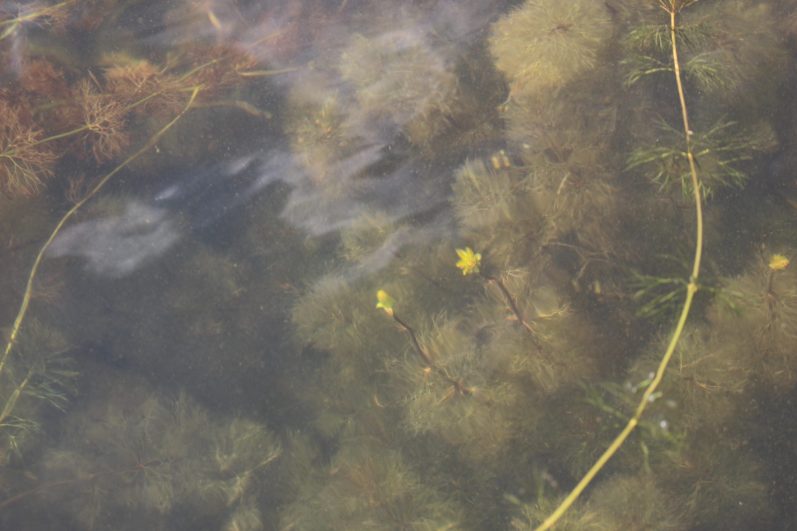 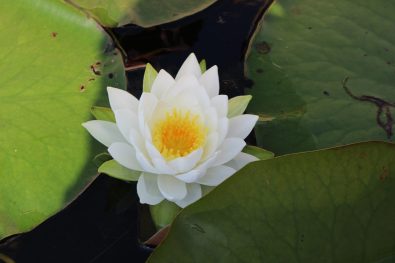 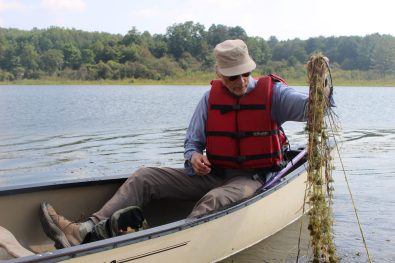 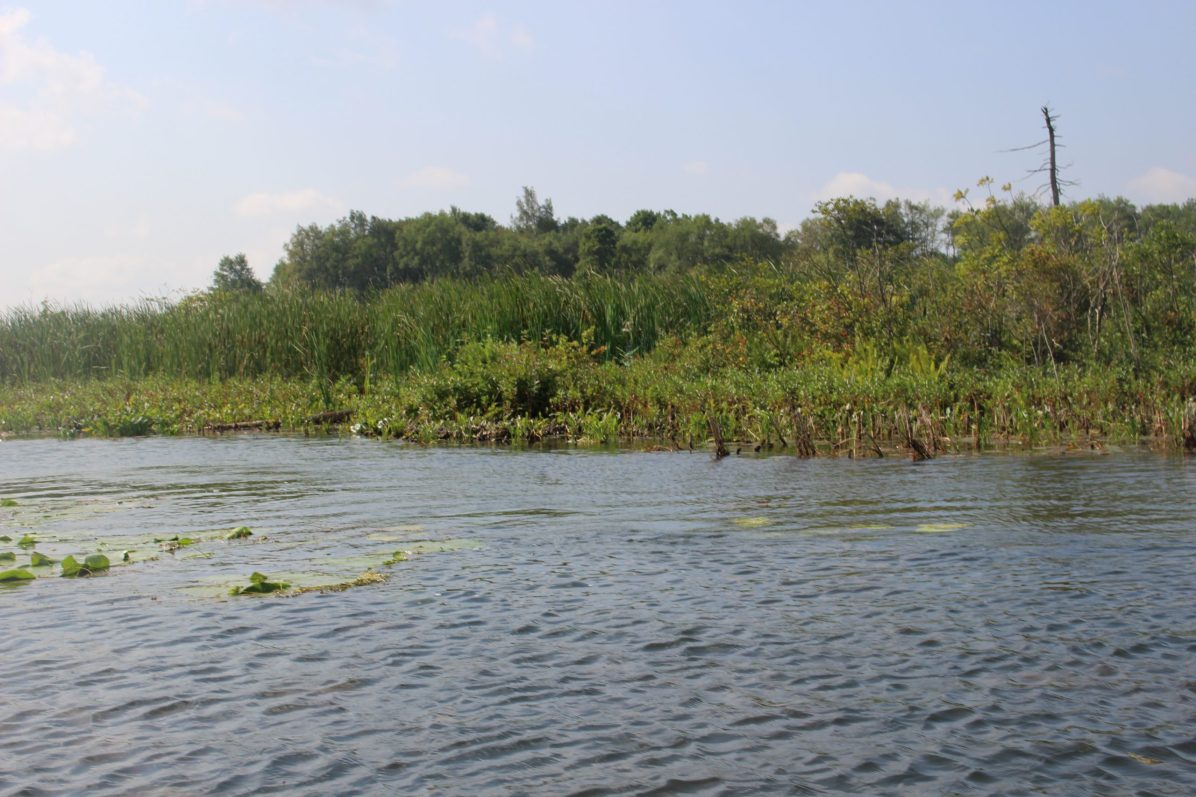 Lake Pleasant is home to 14 native plants that are endangered in Pa. Photo: Julie Grant / The Allegheny Front 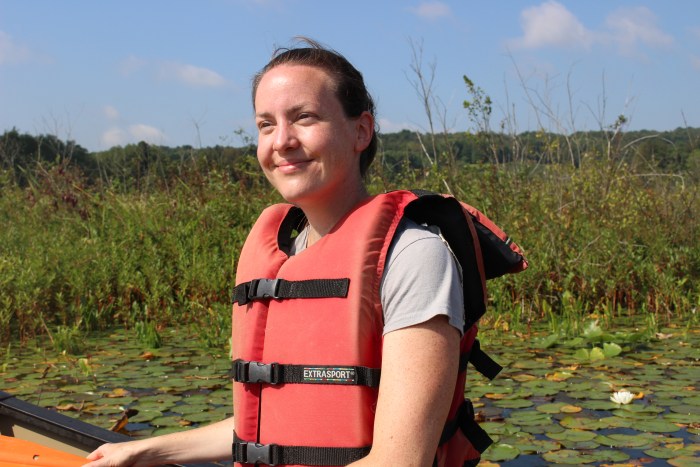 When a stand of invasive plants like those cattails muscles out native vegetation, it reduces plant variety. Not everyone realizes how that impacts insects and birds, says Amy Jewitt, invasive species coordinator with the Conservancy, which owns most of the land around Lake Pleasant.

“For the wildlife, that’s less food for them, that’s less useful habitat for them,” said Jewitt, who is also part of the Natural Heritage Program, which tracks biodiversity in Pennsylvania. “So think of it…you just took out a bunch of restaurants that people would normally have eaten at or farms or something like that.” 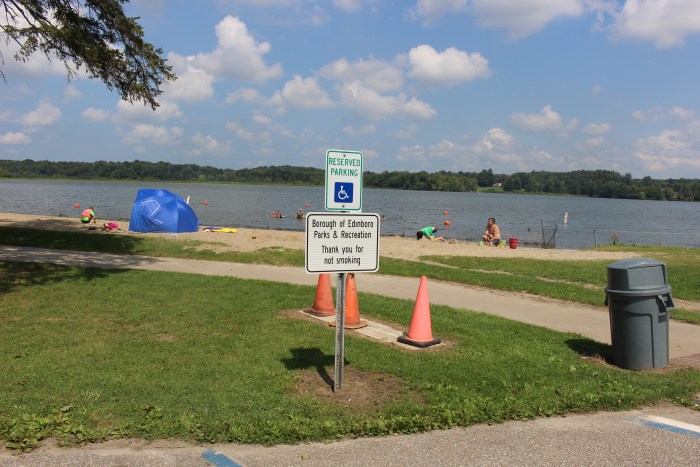 Edinboro Lake, another glacial lake in the region, has more human development, and with it, more water pollution and invasive species. Photo: Julie Grant / The Allegheny Front

A hundred years ago, there was more development around Lake Pleasant. According to Tyson Johnston, land stewardship coordinator for the Conservancy, there was a dance hall and water park, and then later, a social club. “That ended in the ‘80s,” he said.

The Conservancy started buying land to create the Lake Pleasant Conservation Area in 1990. About $1.5 million has been spent to buy most of the land around the lake. In 2002, the Conservancy started mapping and controlling invasive species on these properties, plants like hybrid cattails, garlic mustard, and multiflora rose.

The Conservancy is also working to protect water quality. “We’ve begun to remove some of the dilapidated buildings up there,” Johnston said. 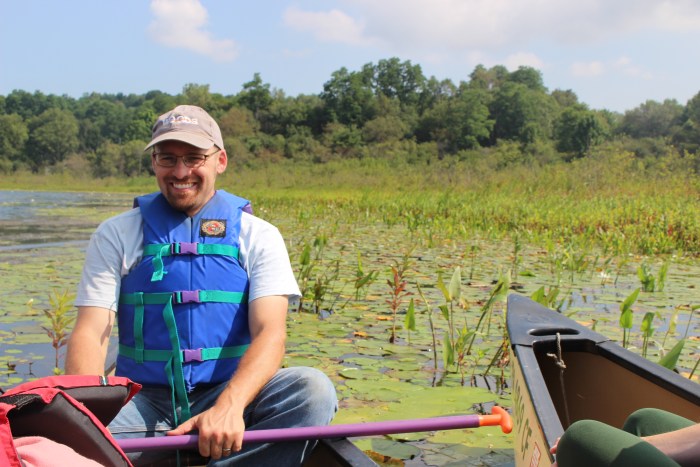 They’ve been removing the old septic systems to prevent runoff into the lake. That’s important because the outlet from Lake Pleasant meanders through wetlands for a few miles and then flows into French Creek, one of the most biologically diverse streams in the northeastern United States, according to Johnston.

Lake Pleasant is deep, 45 feet to the bottom, and is largely recharged by groundwater. The water is filtered naturally, traveling through glacial sediments containing large amounts of limestone, which not only helps maintain water quality but also provides habitat for the lake’s rare plant communities, according to the Conservancy.

In the early 1990s, a scuba diver unearthed the bones of a woolly Mammoth from Lake Pleasant, reminding visitors of its long history.

These days, no motorized boats are allowed and there’s little development around the lake.

“Sometimes people have trouble understanding why that is important, Johnston said. “They see a nice view and they say, ‘well, why can’t we put a house there?’”

Tyson says people can still fish, kayak or canoe on the lake.

“We aren’t trying to prevent people from recreating outside. We’re trying to strike that balance between making these special places last for future generations,” he said. 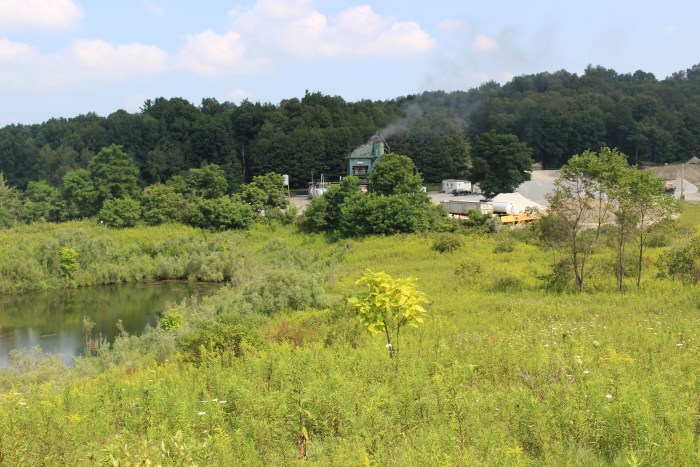 The Conservancy has bought 24 gravel ponds around Lake Pleasant to prevent invasive plants from getting into the lake. Photo: Julie Grant / The Allegheny Front

Threats Beyond the Lake

Back on land, Amy Jewitt drives up the road to see one potential source of invasive plants — a low-lying pond left behind by the gravel industry. Jewitt notices the reddish-brown plant called phragmites, which is common along roadsides. Waterbirds or people inadvertently spread it when it’s not controlled.

“If people use these [former gravel pits] for any kind of recreation or fishing, and not cleaning their gear properly, and then go to Lake Pleasant the same day, they could bring a fragment of a plant along with them by accident, and it could then spread and over time become a really big problem,” she said. 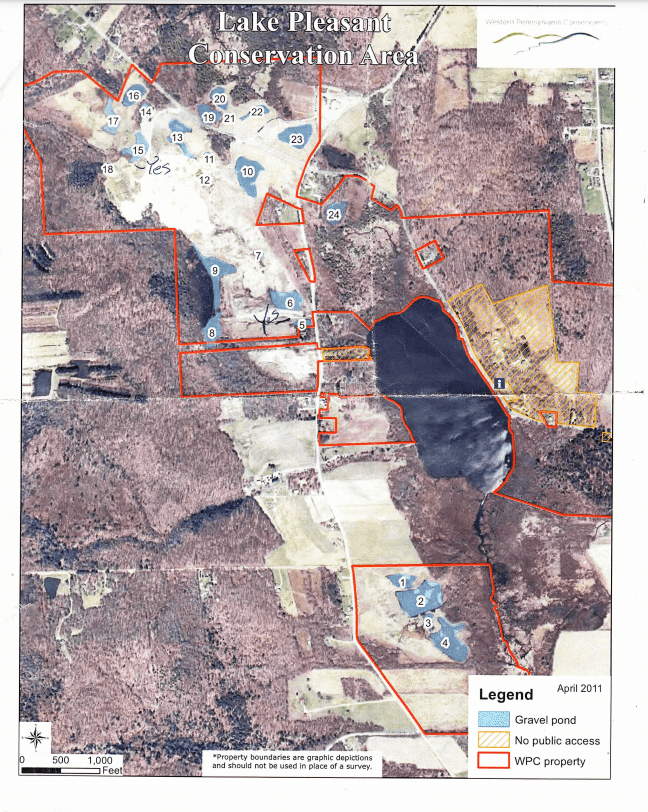 The Conservancy has purchased land around 24 of these nearby gravel ponds to keep watch over invasives that could get into the lake. Phragmites isn’t even the worst of them. “If hydrilla came in here, we would be on that,” Jewitt said of the quick-growing plant which forms dense mats on the surface of the water, shading out other species growing underneath. But phragmites might sit for a while.

“There’s so many that you’re forced to prioritize your work, basically,” Jewitt said. “I think we all accept that we can’t fix all the problems that we focus our efforts on the ones that we can actually make a difference in.”

The more invasives Jewitt and her colleagues control around Lake Pleasant, the better chance they have to maintain the native species in northwestern Pennsylvania’s most pristine lake.

Top Photo: Amy Jewitt and Jeff Wagner, both of the PA Natural Heritage Program and the Western Pennsylvania Conservancy at Lake Pleasant. Photo courtesy of WPC. 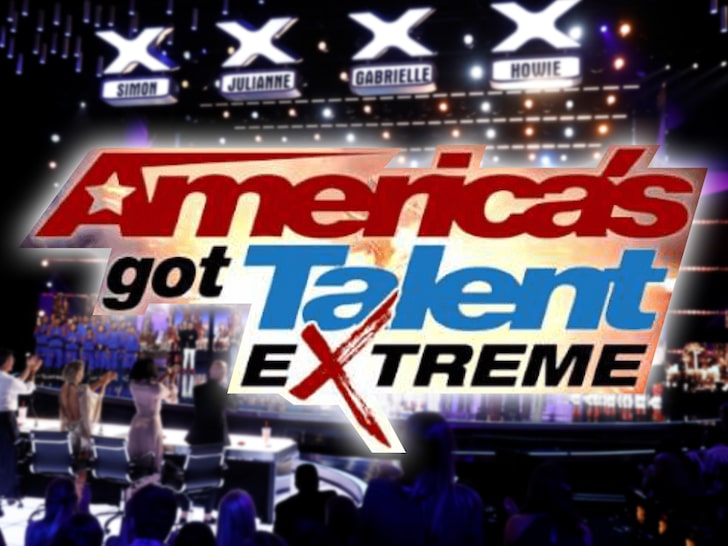 Injured ‘America’s Got Talent: Extreme’ Escape Artist Speaks From Hospital About Accident: “I Was Protected By Love”
2 seconds ago 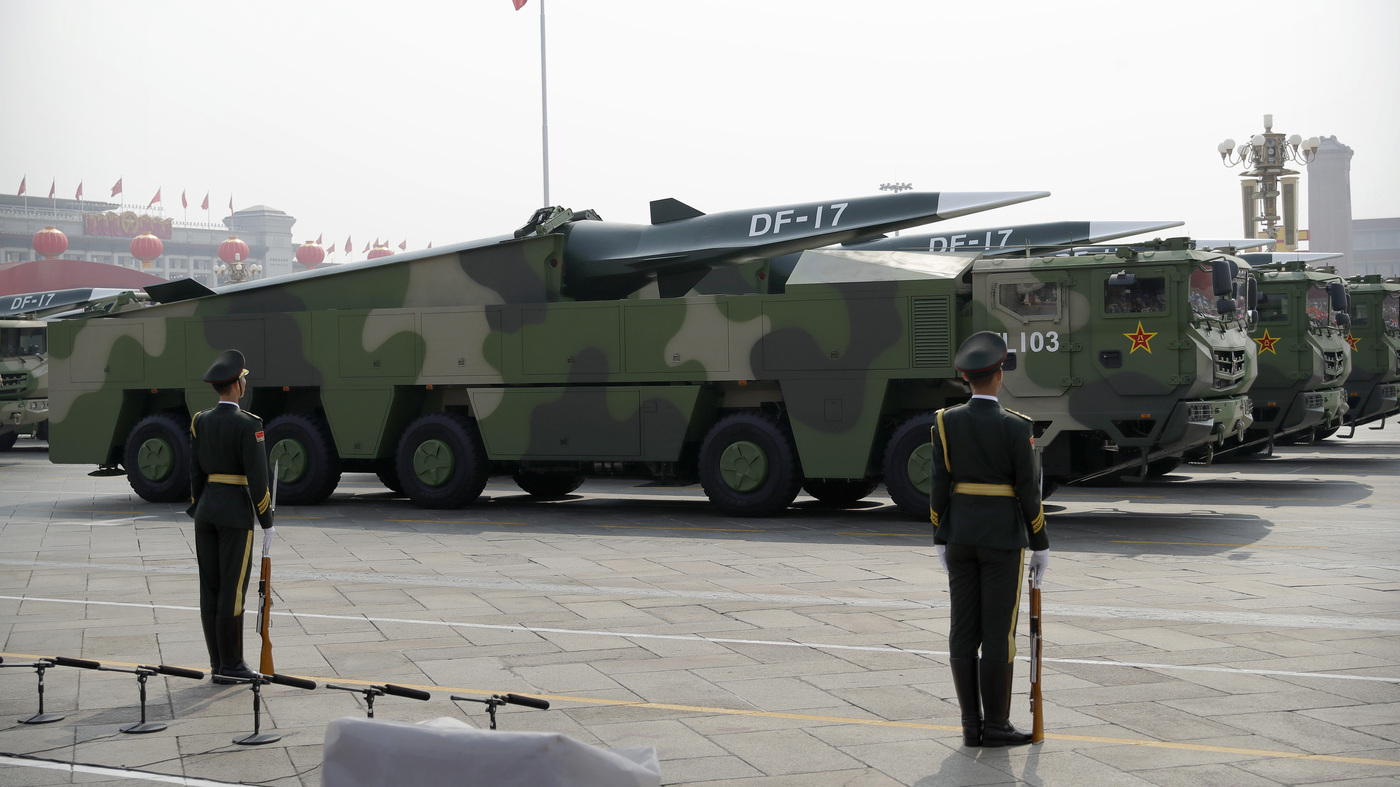 Behind murky claim of a new hypersonic missile test, there lies a very real arms race
3 mins ago