The Biden administration’s limits on new oil and gas drilling on federal land will push investment offshore and only benefit Middle Eastern countries, said the leader of one of America’s biggest fossil fuel-producing states.

Mark Gordon, Wyoming’s governor, said the US interior department’s moratorium on issuing new permits to drill on public land under its control would “send capital elsewhere”, including to private land in jurisdictions with less environmental oversight such as Texas.

“Ultimately, who benefits from that is going to be the Middle East,” he said in an interview with Financial Times.

His comments reflect a brewing backlash against President Joe Biden’s actions to cut carbon from energy supplies in states where fossil fuel production supports the economy, with the federal drilling moratorium drawing fire even from Democrats. State-level opposition could undercut White House aims.

Analysts disagree on how the pause on federal leases will affect energy supplies, with some saying that overall US oil production may be little changed as operators work through stockpiled drilling permits or migrate to privately held acreage.

But the leasing halt could damage the budgets of states with large parcels of federally owned land, including Republican-controlled Wyoming and Democratic-led New Mexico, which is home to some of the most prolific oilfields in the US.

New Mexico’s governor, Michelle Lujan Grisham, told Biden in March that even a modest production fall because of the moratorium would cost the state more than $700m in the next four years, with “real impacts on our ability to achieve major goals like universal access to early childhood education”.

It could also increase emissions by shifting production across the border to Texas where environmental standards are weaker, she wrote to the president, adding: “This runs counter to our shared climate goals.”

Energy-related activity on public lands accounted for more than $450m of income in Wyoming last year, Gordon said recently, “the largest source of revenue for schools”, while the sale of leases on federal lands earned $35m annually in the past eight years.

Tribal lands, which are managed by the interior department’s Bureau of Indian Affairs, have already been exempted from the moratorium.

Mark Fox, chair of the Mandan, Hidatsa and Arikara Nation, three affiliated indigenous tribes that produce oil on the Fort Berthold Reservation in North Dakota, told the FT last week that they won the exemption following extensive lobbying after the moratorium was announced.

“It was one of the quickest turnrounds ever,” he said. “Less than 24 hours and they said, ‘You’re exempted from this’.”

But not Wyoming, which is also suffering from the steady decline of its once-powerful coal sector. 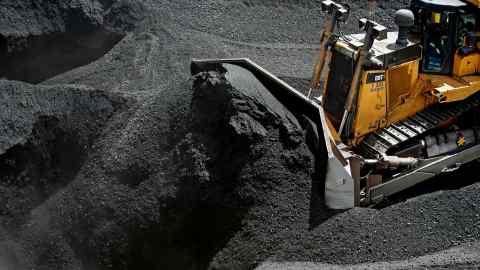 Gordon said the coal industry was “very much imperilled” by Biden’s plan to make the US power sector carbon-free by 2035, and called for federal funding to help make costly projects to capture carbon dioxide emissions viable.

Such technology would be critical to the state’s hopes of achieving “net negative” emissions in the next three decades, Gordon acknowledged.

The Trump administration granted Wyoming money for research into alternative coal uses beyond power generation, an effort to arrest some of the sector’s decline.

Wyoming still supplies about 40 per cent of the US coal burned in power plants, but coal’s share of the country’s electricity market has more than halved in the past decade and last year was just 19 per cent, less than renewable energy.

Gordon last month signed a bill that provided $1.2m in state funds to pay for lawsuits against other states that caused shutdowns of coal power plants in Wyoming or tried to curb exports of coal. Previous litigation failed to force Washington state to open a coal-export terminal on its coast.