FOXBOROUGH, Mass. — Quick-hit thoughts and notes around the New England Patriots and NFL:

1. QB talk: Patriots Hall of Famer and current ESPN analyst Tedy Bruschi knows the hottest topic surrounding his former team is who plays quarterback in 2021, and he is leaning toward a veteran.

“Bill [Belichick], and a guy he has years of tape on, is a little bit more comfortable than trying to go the younger route through the draft,” Bruschi said in his weekly appearance on sports radio WEEI. “Build the team overall through the draft, and find a good veteran quarterback. That could be the way to go here.”

From this perspective, a case could be made for Mariota as the strongest possibility, based on potential availability, modest cost and upside. He has played under four coaches and five coordinators in six NFL seasons. Maybe the stability of the Belichick/Josh McDaniels pairing is a nice match for him.

2. Timing on a QB: If the Patriots don’t have quarterback clarity by the start of NFL free agency in mid-March, it could negatively affect their pursuit of wide receivers and tight ends. For example, put yourself in the situation of someone such as Los Angeles Chargers tight end Hunter Henry; you’re weighing similar free-agent offers from a team that has a defined quarterback situation, and one that doesn’t — it could be a decisive tiebreaker.

3. Stafford fallout: Matthew Stafford‘s trade to the Los Angeles Rams seemed to be his preference over other options, such as New England, Carolina and Washington. Some might have perceived it as a slight to the Patriots’ culture, but I view it from a wider context: Stafford has a residence in California and a greater comfort there. Also, just as Stafford didn’t seem to favor the Patriots, the team’s interest in him certainly wasn’t as high as others around the league.

Marcus Spears and Jeff Saturday debate whether Bill Belichick or Tom Brady had a bigger role in the Patriots’ dynasty.

4. Belichick vs. Brady: Former Patriots receiver Danny Amendola ignited fiery media chatter with his comments to FS1 that Tom Brady, not Belichick, was more responsible for the “Patriots Way.” It was notable how quickly people forgot Brady’s own thoughts, from his spring interview with Howard Stern.

“I think it’s a pretty s—ty argument, actually, that people would say that, because I can’t do his job, he can’t do mine. So the fact you could say, ‘Would I be successful without him, the same level of success?’ I don’t believe I would have been. But I feel the same vice versa, as well.

“To have him, allowed me to be the best I can be, so I’m grateful for that. I very much believe that he feels the same way about me, because we’ve expressed that to each other.”

5. TB12 fan: Patriots defensive tackle Lawrence Guy is predicting a low-scoring Tampa Bay Buccaneers victory over the Kansas City Chiefs in Super Bowl LV on Sunday, but he admits he is biased. In an interview on Sirius XM NFL Radio, he said: “When you played with [Brady] for so long, and understand the effort he’s given, you just want him to win another one. He did something everyone thought he couldn’t do — go to a different organization, play his butt off, and make it all the way to The Show. I want him to win on a personal note, because the legacy he is leaving is going to make future players try to strive to be like that.” 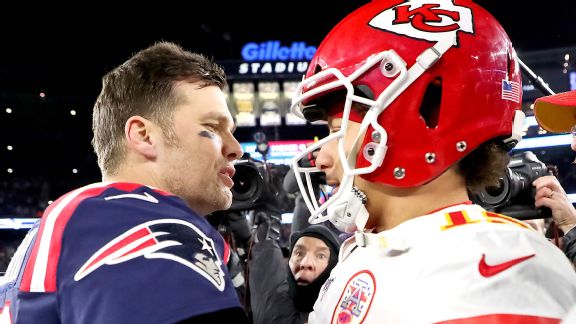 • Round 5 of Mahomes vs. Brady best yet
• Bell and AB: From Killer B’s to SB backups
• Ed Reed’s advice on beating Brady
• ‘Nothing off the table’ in WFT QB search
• Trade destinations for Eagles QB Wentz

6. Patriots eyed Brate: Buccaneers tight end Cameron Brate was looking for NFL opportunities after playing for Harvard. Undrafted, and unable to secure a rookie free-agent contract, his first bite came with a tryout at the Patriots’ 2014 spring minicamp. No deal. Then the Minnesota Vikings‘ spring minicamp. Again, no deal. Finally, general manager Jason Licht gave him the final spot on Tampa Bay’s 90-man offseason roster. That’s the backstory for Patriots followers who might be wondering how Brate — who totaled 91 receptions for 1,381 yards and 18 touchdowns at Harvard, and has 29 NFL touchdowns — didn’t land in New England.

7. Uche recovering: The development of Patriots second-year linebacker Josh Uche will be critical, and it was unfortunate for him that a foot injury knocked him out of a Week 16 loss to the Buffalo Bills and then the regular-season finale. Uche is part of a group of players still showing up to the stadium as he works his way back.

8. Patricia effect: The impact of Matt Patricia’s return to the Patriots, to assist Belichick in a variety of roles, could initially show up in how Belichick fills out his staff. Patricia is bringing along research assistant Evan Rothstein from the Lions, and it wouldn’t be surprising if the Detroit pipeline is tapped again. Someone such as assistant offensive line coach Billy Yates, the former Patriot, could warrant consideration.

9. Draft nugget: The Patriots struck gold at Louisville in 2002, selecting receiver Deion Branch in the second round. If they go back to the Cardinals’ pipeline in the 2021 NFL draft, Tutu Atwell is an early-round prospect who could address the need for dynamic speed and playmaking ability. The 5-foot-9, 165-pound Atwell comes from NFL bloodlines; his dad, Tutu Sr., went undrafted out of Minnesota in 1998 and hooked on briefly with the Colts and Lions.

10. Did You Know: Prior to 2021, the last time the NFL didn’t hold the combine in its traditional format was 1981, when the Patriots had a productive draft with Brian Holloway, Tony Collins, Don Blackmon and Lin Dawson.