It was an impressive catch to the few onlookers at the UPMC Rooney Sports Complex on the second day of the Steelers’ rookie minicamp, one that stood out even more with Harris surrounded by young draft picks and NFL hopefuls.

But it’s the kind of thing the 6-foot-2, 230-pound first-round pick has done for years.

An NFL player for less than a month, Harris handled the query about his one-handed catch and if he only recently acquired that skill like a pro, self-assured and confident in his abilities not only as a running back but also as a receiving weapon.

“I’ve always been catching the ball, man,” he said with a sly laugh. “I always do that, always do that. Not to brag or nothing. What the heck. It wasn’t luck, I’ll tell you that. I’ll do it again for you. It’s not something I work on. I’ve been doing it since, like, middle school. I’ve got big hands, man.”

What you need to know about the Pittsburgh Steelers:

Emphasizing his final point, Harris held up both hands to the camera to make sure everyone on the post-practice Zoom call got a good view of his 10-inch mitts.

Harris was one of college football’s best running backs during his four seasons at Alabama. And the 2020 Doak Walker winner — and his hands — figures to be used in a plethora of roles in coordinator Matt Canada’s offense as the Steelers attempt to overhaul the league’s worst rushing unit from a season ago.

That won’t be anything new to Harris, who has already found similarities in his college scheme and Canada’s plans after a short time with the playbook.

“There’s a lot of things that are similar — it’s just different terminology,” Harris said. “But it’s the same meaning at the end of the day. … A lot of things that’s similar is how they’re going to line me up out wide and stuff like that, how I did in college. Just utilize the running back in the passing game out wide — out wide in the X position.”

Of Harris’ 76 receptions in his final three seasons at Alabama, he made eight lined up out wide. He averaged 8.6 yards per catch as the X receiver and scored one touchdown, coming as he lined up wide right.

Harris was most productive as a receiver when he began in the backfield, recording 66 receptions for 666 yards and 10 touchdowns, according to ESPN Stats & Info research.

A running back’s versatility is highly valued in Canada’s offense, and Harris said he believes with a little film work, he’ll be more than capable of juggling the many responsibilities in the scheme.

“I’m about to be utilized everywhere, so they want me to know multiple positions,” Harris said. “It’s a lot more film work than college. But I don’t have school anymore, so I’m glad I’m off that. I have no issue with learning, spending that much time in the film room, because it’s something I like. I’m ready for the challenge.

“It’s something they picked me for, and I’m glad to be in my position and have the opportunity to block for Ben [Roethlisberger], to learn new information and help out as much as possible.”

Harris’ football acumen and quick absorption of the new material stood out to coach Mike Tomlin even after just a few days.

“He is a sharp guy,” Tomlin said. “He is a football guy. You can tell he is passionate about football. He can articulate the game very well, so it’s a lot to be excited about. 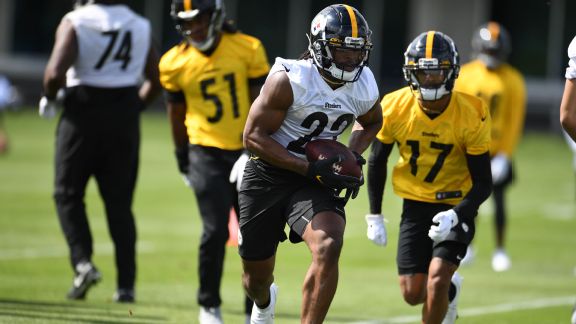 • Steelers’ Harris eager to show off his hands
• How 49ers altered their draft approach
• Ex-Ravens lineman fighting for his life
• DB falls victim to Falcons tryout hoax
• Schedule release: Prediction for every team

“It is more noticeable simply because there’s not a lot of people to work with. He’s getting an opportunity to work one-on-one with Coach [Eddie] Faulkner at the running back position that provides plenty of opportunity for him to verbalize his knowledge and things of that nature.”

“He’s a hell of a running back,” tight end Pat Freiermuth said. “Going through walk-through today, he makes very good cuts and he’s very smart with the football.”

Harris impressed Tomlin and his teammates, but he knows there’s still a ways to go in his methodical process of acclimating to the NFL.

“I have to start at step one for all the basics,” Harris said. “I have to relearn — more explosive footwork, have better eyes, catching the ball better. Just try to be more of an explosive player, because the competition level difference between college and the NFL, it’s two different places.

“Every time you hit a new pinnacle in life, or a new step, for me, I want to start from step one and make my way up. I’m going to be playing against a lot of first-rounders, a lot of franchise players, All-Pro, HOF. It’s all about being a sponge and starting from step one.”